My mom's coming to visit tomorrow.  Now I have a sudden urge to clean my house.  Funny how even though I'm getting old and my kids are beginning to leave my home to go out on their own I still revert to certain behaviors from my youth and childhood when I'm around my family.
Posted by Kim Grace at 12:45 AM No comments:

Long day teaching.  Finished cleaning up, prepped for the following day and was finally in my car on the first leg of my 40 minute drive home.  If I can get on the road early enough it can be cut to 30 minutes so I was trying to get to the freeway ASAP.  When the cars in front of me came to a dead stop I was not happy.  As I was trying to figure out what was going on I saw 3 boys running from the sidewalk to the vehicle two cars ahead.  I was hot, tired and anxious to get home so my initial reaction was annoyance at the inconsiderate driver who thought it was okay to make everyone wait while they let passengers get in their car instead of pulling over.  As I was grumbling under my breath I realized that the boys hadn't run over to get into the car.  They had run to the rescue of a poor soul whose car had ceased moving.  They were young, skinny boys, probably fifth or sixth grade.  With their backpacks still on their backs they put their scrawny little shoulders into it and pushed the car safely to a gas station, then just walked off.  I don't think they knew the driver.  I don't think they even asked if help was wanted, they just jumped in.

Back to me.  I was still hot, tired and anxious to get home but had a different attitude as I resumed my commute.  I work with kids most of the time.  I get frustrated with the apathy, laziness and self centered entitlement that many "kids these days" manifest.  I worry about the future of our society.  In addition I work in low income areas where a larger percentage of students exhibit these traits as well as other traits that go along with their economic situations.  This was a relatively insignificant incident.  I don't know if anyone else noticed or thought anything about it but for me it was a needed reminder of the innate goodness in people, even if it's deeply hidden in some.  My students sometimes do ridiculous and inappropriate things.  They can make me crazy.  Some days I wonder why I bother.  A few students don't ever seem to listen or care.  But there's another side to them.  Even the most obnoxious, frustrating kid will run to get the door or help me with my boxes.  Sometimes they even get into arguments over who gets to help.  They really want to help, even when I don't really need it.  It's usually easier to say "no" and do things myself but now I'm thinking that fostering that desire to help may be as important or more important than any of the art skills I'm supposed to be teaching.  Although my drive home ended up being closer to 40 minutes it didn't feel that long and I was thankful for the attitude adjustment.
Posted by Kim Grace at 6:41 PM No comments:

I need to learn how to pace myself.  My body realizes it's not as young as it used to be even though my expectations of myself haven't changed.  I think I over did it in the yard today.  Winter and neglect did a number on it.......the yard and my body.

When we bought our house it was in good shape but outdated.  We've spent years trying to turn it into the  place we wished we could afford when we bought it.  Most of the work we've done ourselves a little at a time.  I do the bulk of it because I'm picky about the way I want it done.  The back yard has been screaming for attention for years but it's been easier to ignore it than deal with it because of lack of time and money.  I also couldn't pin down exactly what I wanted (a waterfall and Japanese garden were part of the equation).  With two boys in college and another a year away from college I decided to scale down my earlier plans and go for a budget version I think I can live with.

The yard is small.  We had a garden at our former home and the last couple of years I attempted one here with limited success.   At first there was too much shade but after the neighbors cut down some large trees that was no-longer an issue.  That left crappy soil and a slope as my two biggest obstacles.  That and the fact that I still wanted my yard to look fabulous even though a vegetable garden is the first thing you see when you walk in the backyard.  I recently found some creative ideas on ways to use cinder blocks and it really got me motivated.  They are cheap, versatile and easy to get.  I plan to use them for terracing, making a plant wall and building a fountain.  I'm excited about it!  It's nice to finally have a plan, one that I think is doable.  I just have to be patient and pace myself.

Here is my progress the last two weekends.

I finished up the first four weeks of art with grades K-3 and then I had a week off teaching during STAR testing.   It was nice to have a week to try to catch up with all the things I've let go around the house.  Unfortunately I didn't make much of a dent in my "to do" list.  Being a teacher, artist, wife, mother and wearer of many other hats requires some juggling and at times it's difficult to keep all my balls in the air.  I tend to be an optimist when it comes to time and I always think I have more then I actually do.  When working on a project it's easy for me to be distracted by another project which makes everything take even longer.  I very seldom work on one thing at a time.  It's funny to me that I didn't realize that I'm a "type A" personality until a few years ago.  Duh.

This past week I started teaching the upper grades and had all new teachers and students.  It's been awhile since I've worked with the older kids so that was new too.  It's always tough the first day with a new class, especially when I'm "art on a cart" and don't have my own room.  I'm happy to say that everything went well and I enjoyed working with all the classes.  I love the younger kids because they are so darn cute and I get lots of hugs but it's nice to work with the older kids because we can take the art work to another level.  These kids don't get enough art and they really love it.  They got so involved with their projects that they didn't want to stop....so we didn't.  At least we didn't stop on time and the teachers were more than okay with that.  I have extra time between classes now so I have more flexibility.   It's refreshing to be at a school that appreciates and supports the arts.   At some of the schools where I worked it felt more like it was just tolerated.


A Sampling of the projects from this week:


The third graders finished working on their Picasso/Matisse paintings 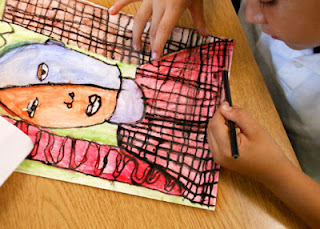 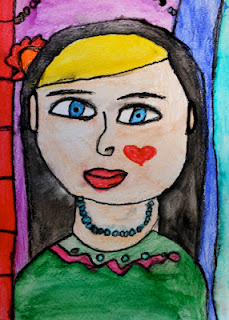 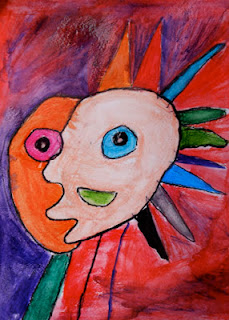 The First/Second grade class finished their Georgia O'Keefe inspired watercolors.  They are SO beautiful! 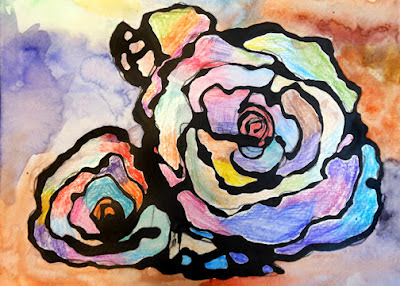 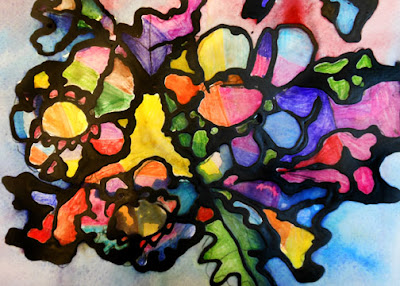 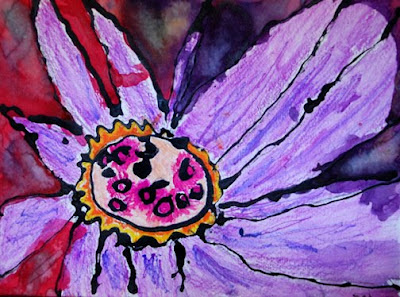 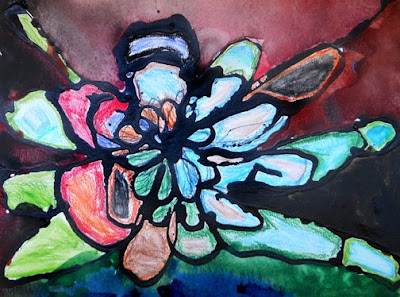 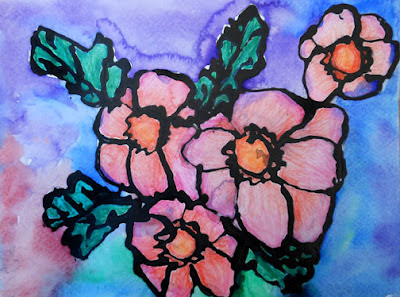 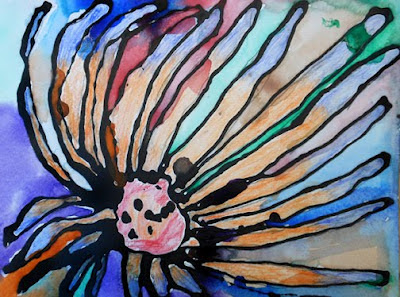 Getting ready for my shift at the gallery.  Since it's a co-op we each take two full day shifts to keep it running.  I'll be there all day today if anyone is in the area and wants to drop by and see some fabulous art in a beautiful setting.

Tomorrow is our fourth annual Artful Bra Show.  There will be food, entertainment and some very, creative bras that will be auctioned off.  All the proceeds go to the  American Cancer Society.  It's a fun way to spend an evening and benefit a worthy cause!  You can find more information here:
https://www.facebook.com/ArtfulBraShow

I'm tired.....and there seems to be a direct correlation between the about of sleep I get and how I feel in the morning.  I understand this on some level and yet I keep staying up way too late at night working on one project or another.  Someone once told me that one definition of insanity is doing the same thing over and over with the expectation of a different outcome.  Hmmmmmm.......that's not good.
Posted by Kim Grace at 12:06 PM No comments:

It's been awhile since I've posted not because I haven't been doing anything but BECAUSE I've been doing things.  I started teaching at a new school and that has been taking up the bulk of my time.  In addition I've been trying to find time for my own work.  I started an art blog for my new school so if you're interested in the projects we've been working on check it out.  http://earlwarrenarts.blogspot.com/
Posted by Kim Grace at 2:24 AM No comments:

Email ThisBlogThis!Share to TwitterShare to FacebookShare to Pinterest
Newer Posts Older Posts Home
Subscribe to: Posts (Atom)
"Every child is an artist. The problem is how to remain an artist once we grow up." Pablo Picasso

Kim Grace
As a multi media artist and teacher I continually look for new ways to create. I especially enjoy recycled and unusual materials. I love to take an object that is destined to be thrown away and give it a new purpose. Working with other artists helps inspire me. Teaching motivates me to learn more.